Limahong - A Chinese Pirate Who Invaded the Philippines - Part 1 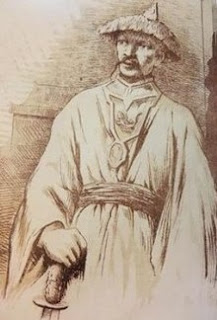 The Philippines and Its Species-Rich Ecosystem - Part II

Philippine fauna forms a distinct subdivision within the Malayan region and provides evidence of the land bridges that once linked the archipelago with mainland Asia via Borneo. Palawan is especially rich in wildlife, which is closely related to Borneo’s. The wildlife of mainland Mindanao and Sulu also show affinity with Borneo, while northern Luzon has species in common with Taiwan and the Asian mainland.
Although the fossilized remains of elephants, have been found, the Philippines today has few large mammals. The absence of major predators means an abundance of small animals.

There is a variety of fauna. Each September, migratory birds stop over on their way south from a chilling China. The Philippines is home to several indigenous birds and animals: sea turtles, mouse deer, tarsiers, and the Philippine eagle to name a few.

Carabao - Photo by Wikipedia
The strong domesticated carabao (water buffalo) is widely used in farms – as a form of transport and for tilling the soil. The carabao have no sweat glands and they cannot work in intense heat. In areas where it is too hot for carabao, farmers use zebu (Brahma cattle). In many places you will see ponies providing transportation.

Wild water-buffalo, probably descended from domestic animals, can be seen in Luzon, Mindoro, the Calamian group, Masbate, Negros and Mindanao, but a very small buffalo, called the tamaraw, on Mindoro, is native to the Philippines. This tiny buffalo, savage and untameable, often attacks and kills the larger water-buffalo, nearly twice its size.
The Philippine has quite a few kinds of mammals, but no marsupials. On the tiny islands of Balabac, between Palawan and Borneo, a kind of mouse deer ranges, one of the smallest deer in the world. Axis deer found on Sulu were probably introduced a century or two ago. On the islands of Basilan, Mindanao, Leyte, Samar and the Calamian group, red and brown deer occur, related to the sambar deer of Asia. Another deer, found on Masbate, Panay and Guimaras (between Panay and Negros), and native to the Philippines, is dark-colored with buff spots.
Two kinds of wild pigs and a kind of monkey can be seen on most of the larger islands, and tiny primates called tarsiers are found from Basilan to Samar. Squirrels live on the eastern islands, and also on Palawan, and a strange anteater called the pangolin, on Palawan.

Carnivorous animals of the Philippines include shrews and otters, two kinds of civet cat, and a small wild-cat. Bats and flying foxes are very common, and another strange flying mammals is found in the Philippines – the colugo, which looks vaguely like a cross between a bat and a flying squirrel, and is sometimes called a “flying lemur”.

Sadly, most of these animals face extinction. The incessantly over-expanding human population, however, encroaches relentlessly on natural habitats. Deforestation and hunting have caused many species of animals that once ranged broadly to be confined to specific areas. Wild pigs are an exception: they have adapted well to the changing environment.
Bird life in the Philippines is abundant – over 700 species have been recorded. Pheasants are confined to Palawan, but jungle fowls are found almost everywhere, and a strange megapode (or incubator bird) builds next mounds in the warm ash on volcano slopes. Water and shore birds include snipe, plover, turnstone, herons, bitterns, and ducks.
About 50 kinds of birds of prey live in the Philippines, ranging in size form a sparrow-sized falcon to the large monkey-eating eagle – twenty kinds of birds of prey are found nowhere else in the world. Some twenty kinds of kingfishers, most of them native to the Philippines, live along the streams and waterways.
A dozen kinds of hornbills occur only in the Philippines. One kind of cockatoo and about twenty kinds of parrots and parakeets live in the forests, as well as larks, barbets, broadbills, starlings, orioles, weaver finches, nuthatches, titmice, shrikes, tailor birds, thrushes, flycatchers, swallows and swifts. The swift whose nest, collected for soup, is eaten with relish in Asian countries, lives in some parts of the Philippines.
About twenty kinds of woodpeckers, and the same number of cuckoos and honeyeaters are found here, and some twenty-eight species of colorful sunbirds. Some of the other kinds of birds in the Philippines are frogmouths, beebirds, and night-hawks.
The Philippines has over 20,000 types of insects, including ants, termites, locusts, land-leeches, butterflies, moths, beetles, cockroaches, mosquitoes, and wasps. One of these wasps, the tiger hornet, is among the most feared of jungle creatures in the Philippines – just as terrifying as any of the venomous snakes of the region. Nesting in small colonies low to the ground, these large black insects have a four-inch wingspan, and a bright orange strips across the abdomen. Occasionally they nest on a jungle path, where an unwary person might disturb them. One or two bites cause intense pain but, if the whole group of wasps attack, they can kill the strongest of men in a very short time.
Filipinos are very fond of honey, especially in places where sugar cane does not grow. Honey bees are encouraged to nest in trees with easy access.

Land and freshwater reptiles include many small lizards, such as skinks and geckoes, and large goannas, venomous snakes, the reticulated python and other pythons and boas, and the only sea-snake in the world known to have adapted itself to a life in fresh water (found in lake Taal). Land turtles are also common, and a crocodile grows to a length of 25 feet, and may measure about three feet across the back.
About 40 kinds of frogs live in the Philippine region – most of them closely related to species found in Borneo. Scientists believe that these reached the islands on canoes laden with produce, or crossed many centuries ago when the Philippines region was connected to Borneo by land bridges.
The seas on the western side of the Philippines and between the islands, fairly shallow and warm, support a huge variety of marine creatures. Sea mammals are represented by dolphins, dugongs, and whales. The largest marine animal in these waters is the striped whale. Turtles, sea snakes, coral snakes, and the huge estuarine or sea-going crocodile are also common. Over 2,000 varieties of fish live in the Philippine region, including the smallest fish in the world, only half an inch long when fully grown. Most of the fish are of Indonesian origin, with some Chinese and Japanese kinds, and others similar to fish found near Tonga, Samoa, and Hawaii. Tereapon, catfish, perch, mudfish, mullet, milkfish, trevally, long-tom or garfish, shrimps, crabs, oysters, and squid are caught close to shore by commercial fishermen. Salmon, herrings, and other fish are farmed in tidal pools. Oceanic fish are anchovy, bonito sailfish, marlin, sharks, mackerel, barracuda, jewfish, bass, snapper, tuna, and many others. Many kinds of colorful reef shells come from the warm seas close to the islands.
Source:
The Philippines by John Cockcroft
Philippine Handbook by Carl Parkes
Philippine Guide by Jill & Rebecca Gale de Villa

Rosalinda Morgan
If I'm not writing or blogging, you can find me out in the garden getting my hands dirty. I enjoy gardening, where I get my exercise, commune with nature, and get my spirit renewed. The main focus of my writing is to educate, motivate, and inspire people. Visit my main blog at www.rosalindarmorgan.com. I have written 4 books - BAHALA NA (Come What May), The Iron Butterfly, Saving Wentworth Hall, and Stop and Smell the Roses - available at Amazon and Barnes and Noble.